Create an Account - Increase your productivity, customize your experience, and engage in information you care about.


Many people have asked about the fact that the creek at Roosevelt Beach at one time flowed into Tuscarora Bay. If you can picture in your mind that in this photo there was several hundred feet of land which has eroded away over some fifty years along this shoreline. The old maps show that the creek at Roosevelt Beach made a sharp turn to the east and flowed into the west end of Tuscarora bay. Early photos show that the high bank of land ran along in front of what is today called Tuscarora State Park.

Cutting Off The Creek


Before the development of Sunset Island, a farmer on the west side of what we call Roosevelt Beach today put a gate across this narrow strip of land that separated the lake from where the creek made it’s sharp turn into Tuscarora Bay. This gate was used to pasture his sheep on this long strip of land, which had high banks and was surrounded by water. Later as people used this entrance to Sunset Island area they referred to this as the Sheep’s Path.


The building of the piers in the 1950’s helped stop some of the erosion but in the 1970’s a long breakwall was built between what is called the large and small island to prevent the lake from cutting into Tuscarora Bay. Currently lake levels have been maintained by the locks at the St. Lawrence Seaway, so the erosion of the past has not occurred. 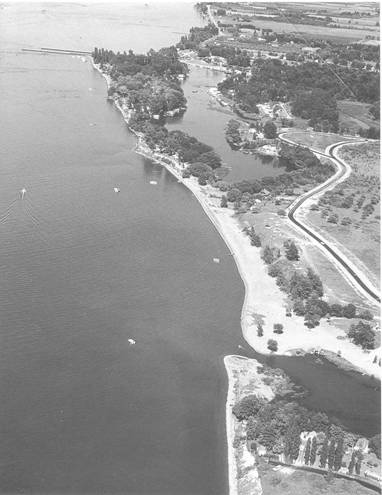